The State Association “Turkmen Atlary” is a government institution responsible for the development, popularization, improvement of the purebred Ahalteke and Yomud horses, as well as the operation of equestrian complexes in Turkmenistan. Under the leadership of the Esteemed President in a picturesque place near the foothills of the Kopetdag in honor of Aba Annayev, a modern residential area for 114 households with all conditions for fruitful work of horse breeders as well as a number of other social facilities, a kindergarten, a school and a shop were built. . 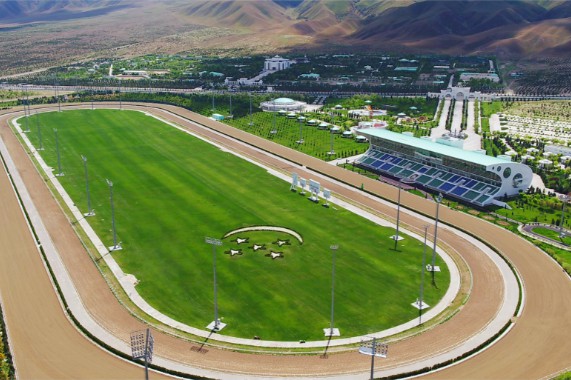 A training center with an indoor arena was built in the city of Ashgabat and the International Quarantine Center was located on the territory of the Ahal velayat. Under the chairmanship of the Esteemed President every year on the last Sunday of April in Turkmenistan at the international level is celebrated the National Holiday of the Turkmen Horse. On the eve of the holiday competitions in equestrian jumping are held, mileage as well as horse racing among junior riders and master tutors, a competition for the title “The Most Beautiful Horse of the Year” among racers, a meeting of the International Ahalteke Horse Breeding Association, the International Exhibition-Fair and a scientific conference “Turkmen horse and world art of horse breeding”. Through the efforts of the head of state in our country has created a group of national equestrian games “Galkynysh”. This group has repeatedly become winners of international circus festivals in Italy, Russia, and China, and each time with great furor.

Under the patronage of the National Leader, within the framework of the program of socio-economic development of Turkmenistan for 2019-2025, a grandiose investment project, the construction of an administrative center, will be implemented in the Gokdepe etrap of the Ahal velayat. According to the master plan on the historic land of the famous Ahalteke in the administrative center of Ahal velayat, it is planned to build the building of the Higher International School of Horse Breeding with a hippodrome and training fields, arenas and stables, as well as the Scientific and Production Center of Horse Breeding. These facilities, located not far from the Ahalteke International Equestrian Center, will together form a single system.